Living in West Virginia, Daniel Brenneman is a man of many passions. He’s a dedicated father of three who also balances three jobs and volunteers at his local Christian church. Years ago, Daniel needed a remote job to provide for his family during the months he and his wife were on the road for traveling ministry. Though at first skeptical, he turned to CareerStep for help. Becoming a medical transcriptionist was an answer to prayer for Daniel and his family, leading him to the successful, flexible career he’s enjoyed for nine years. This is the story of how Daniel invested in himself with CareerStep, enabling him to do what he loves most as a father, man of faith, and medical transcriptionist.

Finding A Way To Meet His Family’s Unique Needs 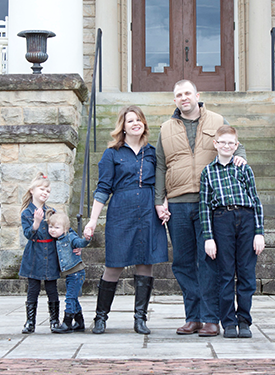 First, let’s go back nine years. Daniel and his wife, Hannah, traveled in ministry with an evangelist. This faithful service took them on the road six months out of the year. To support their lifestyle, Daniel rounded up odd jobs while Hannah worked for a phone company during the months they were home. That half of the year was their financial mainstay. Traveling ministry was expensive, and Daniel sought a way to continue helping people without causing a financial burden for his own family. When they were traveling, Daniel tried making money online, but he barely broke even. Then he saw an ad about working from home as a medical transcriptionist. “I thought it was a scam but then got online and checked what it was about,” said Daniel. “When I talked to someone at CareerStep, I thought it may be the answer I’d been looking for—to meet our needs so we could meet those of others.”

“When I started CareerStep, the course was an education tool, but it was more than that. It gave me the tools to be able to get my foot in the door to get that first job.”

Daniel decided to take the leap. “When I started CareerStep, the course was an education tool,” he explained, “but it became more than that. It gave me the tools to be able to get my foot in the door to get that first job.”

Growing A Career—And A Family

“They gave us a year to complete the program; I did it in nine months. I did it as soon as I could.” – Daniel Brenneman

He began his coursework with CareerStep in January 2007, the same month Hannah announced they were expecting their first baby. This news prompted Daniel to set a training deadline. “CareerStep gave students a year to complete the program; I did it in nine months,” Daniel said. “I did it as soon as I could because the baby was coming and I needed to get a job. So I took the final exam and finished in August.”

Approaching completion, Daniel signed up to receive additional information from CareerStep to help him find a job. Included in the packet were tips on how to get started, even with no related work experience. “The first person I talked to said she was really reluctant about hiring me. She’d never heard of CareerStep and said, ‘I really need you to have experience,’” remembers Daniel. “I did exactly what CareerStep put in their packet. I was able to do some transcription jobs for her as a test.” And it worked.

Using medical reference materials, software, and a foot pedal he received from CareerStep, Daniel aced the jobs he completed as a test and was hired as a medical transcriptionist for a small, local business serving local hospitals. “I actually got my first job before my CareerStep certificate came in the mail. My boss couldn’t believe I was able to do what I did with nine months of online study.”

In Daniel’s first transcription gig, his boss trained him for a few weeks. “When I had a question, I was kind of like Luke Skywalker going back to Yoda,” he said. “My boss really helped me out. I went to her a couple of times and then she set me loose to work from home.”

“It was the beginning of both career and parenthood, and they worked together really well.” – Daniel Brenneman, stay-at-home father of three and medical transcriptionist

Daniel worked from home and cared for his infant son while his wife went back to work. He and his wife wanted their kids to grow up knowing they were a priority. “It was the beginning of both career and parenthood, and they worked together really well,” he said. “I didn’t have a set time to work; I just needed to get the work done by a certain time. I was able to leave my desk to tend to him and get a bunch of work done during his naps.”

A Location- And Economy-Proof Career 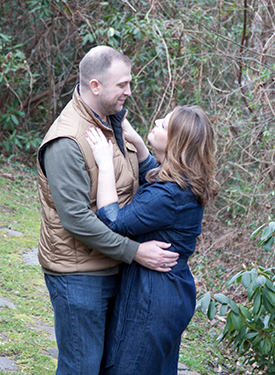 “I remember there were a handful of times I was actually transcribing in the passenger seat of our van using my phone as the modem, and my wife would be driving.” – Daniel Brenneman

Daniel would take his laptop, medical books, transcription pedal, and everything he needed for work with him as he and his family traveled. “I’d set up my work station wherever we went, and we would never know where we were staying,” he said. “It was very rarely a hotel. Sometimes it was someone’s house. Sometimes it was in a church parsonage. Sometimes it was in an RV. We didn’t know where we were going to set up. I remember there were a handful of times I was actually transcribing in the passenger seat of our van using my phone as the modem, and my wife would be driving.”

“That was a lot of fun,” he said. “Not every job will let you do that, but there were special cases where I didn’t have to have a consistent internet signal.”

“Not every kid gets to go to work with their parents and see what they do, but my kids see what I’m doing and ask questions” – Daniel Brenneman, SAHD, medical transcriptionist

Later, the family moved to New York City in ministry. With a portable career, Daniel could take his job with him. Being employed full-time was essential for the family to secure an apartment in a place they’d never been before. At that point, the Brennemans, then with two kids, spent four years in the Big Apple, completing their mission. “I would wake up, get the kids breakfast, start our son’s homeschooling, take care of the baby and would work the night shift part-time.” Evening shifts worked best, without the distraction of babies in the background.

“Not every kid gets to go to work with their parents and see what they do, but my kids see what I’m doing and ask questions,” said Daniel “They know I’m not just going off somewhere, and it’s a big mystery, and they have to use their imaginations to see it. I’m here. I’m home, so if they want to share something with me right away or if they need help fixing a toy or something, I’m at my desk and can take care of that.”

“Thanks to the opportunity CareerStep gave me and because of its credibility in the industry, I have had no problem finding work in this troubling economy,” said Daniel. “I am so thankful I invested in myself with CareerStep.”

–
In addition to being home, Daniel hasn’t had to worry about layoffs or changes in the economy. “Thanks to the opportunity CareerStep gave me and because of its credibility in the industry, I have had no problem finding work in this troubling economy,” said Daniel. “I am so thankful I invested in myself with CareerStep.”

Daniel and his family are now back in West Virginia where he, until recently, worked three jobs, including filing at a local physician’s office. “It was non-stop, but that’s how I operate—about 55 hours a week,” said Daniel. “I love what I do, and all three jobs are related to my studies at CareerStep. That was the foundation of it all.”

Recently, Daniel left his part-time gig at the physician’s office to focus on a new medical transcription job with an ambulatory urgent care center company. Getting the job was a challenge. “They are one of the most difficult companies to get in with because their transcription test is very difficult,” said Daniel. “It’s one of the hardest I’ve ever taken.” He submitted three letters of recommendation, including two from doctors. He passed the initial screening, and the company flew Daniel out to Richmond, Virginia, to test again.

When he was hired, Daniel brought home a company computer and now works Monday through Friday, any hours between 12 a.m. and 11 p.m. He has total freedom to choose when he works, enjoys the highest pay he’s ever had, and appreciates the perks and benefits like holiday pay. “I will retire from this company. My family is set to be debt-free early next year, and we are putting money in savings to buy a house!”

“If you’re serious about taking that step, CareerStep is the place to go for medical transcription. It is a simple, affordable solution for you to make a change.” – Daniel Brenneman, CareerStep learner

Daniel said doing medical transcription from home is exactly what CareerStep says it is, a career choice. Daniel loves being able to set his own schedule, balancing work, family, and religion. It can be fun, but he says he had to be serious about changing his life. “If you’re serious about taking that step, CareerStep is the place to go for medical transcription. It is a simple, affordable solution for you to make a change,” he said.

“Every Race Has A Start”

In the past nine years, Daniel has developed a passion for healthcare. He sees the importance of accurate medical records and knows even though he’s not physically in the medical office, the work he does impacts patient care. Looking ahead, Daniel plans to take the exam for the Certified Medical Transcriptionist (CMT) credential in his long-term career in healthcare.

“I love what I do. I’m still helping people and feel I have a foothold in the industry,” said Daniel. “Every race has a start, every rocket has a launch pad, and every story has a beginning. I’m glad I started with CareerStep.”