How Does A Single Mother Of Six Provide For Her Family? 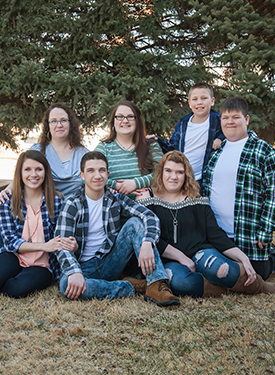 When life threw Elizabeth Jones a big challenge, she responded bravely. After her divorce, Elizabeth wasn’t sure how to support herself and her six children, all under age 11. She had just given birth to her sixth child, was single, and all she had was a high school education. She’d tried going to college in the past, but at this point, she couldn’t afford daycare for her kids. This is the story of how Elizabeth, a single mom of six, found CareerStep’s Medical Transcription course to be a life-changing tool that enabled her to provide for her family.

She started researching work-from-home options. “Some of them were crazy, like stuffing envelopes for pennies, but somehow I came across CareerStep.” Elizabeth remembered her mother had worked in medical transcription for a decade. It seemed like a good option. Elizabeth was glad she took the leap.

Completing CareerStep Training With A New Baby On Her Lap

“I had tried going back to college before, several times, and never could finish. CareerStep was the only thing I’ve been able to stick to after having kids.” – Elizabeth Jones, mother of six

“I had tried going back to college before, several times, and never could finish,” said Elizabeth. She’d get through one semester, then struggle to get back again. “CareerStep was the only thing I’ve been able to stick to after having kids.” What motivated her to finish? “I had no backup,” said Elizabeth. “It was like my only option. That was the determination I needed to get done and support my kids.”

“I was never good at English and typing… I just told myself it’d work out and I’d be able to support my family, and make a career from it.” – Elizabeth Jones, promoted three times in eight years at a transcription company

“I was never good at English and typing—that was never my strength—so it was never anything I thought I would do,” said Elizabeth. “I just told myself it’d work out and I’d be able to support my family and make a career from it.” That determination pushed her through completing the course, which took her a year. “It kind of amazes me, when I look back, that I was able to do it,” said Elizabeth. “I didn’t have anyone watching my kids and most of them were not in school yet. I just did it when I was able and got it done.”

“When I started working I remember having my baby on my lap as I’m trying to type a report,” said Elizabeth. “I guess you do what you gotta do.”

Elizabeth completed her training from CareerStep’s Medical Transcription program in 2007. She was eager to put her new skills to work and provide for her family. “I applied everywhere. I remember counting 19 different jobs I applied for,” said Elizabeth. “I was able to find a job within a month.” She was hired by Nuance Transcription Services, a leading medical transcription service organization based in Boston. She’s one of approximately 5,000 home-based and office employees who serve hospitals and physician groups throughout the United States. “When I started working I remember having my baby on my lap as I was trying to type a report,” said Elizabeth. “I guess you do what you gotta do.”

Sacrificing Sleep To Be Involved In Kids’ Activities 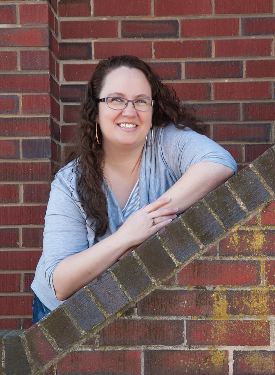 In her first role with the company, Elizabeth was a medical transcriptionist with free reign over her schedule. “I got to work whenever I wanted to for six months. Then they decided to move everyone into being employees with schedules,” she said. After her promotion to Quality Control, Elizabeth was assigned to the first shift of the day, during the hours most of her children were in school. When she was promoted again, she was given the overnight shift, 9:00 p.m. to 5:00 a.m.

How does she manage working through the night? “It has been rough, but it still works out,” said Elizabeth. “I work while the kids are sleeping, so there’s no distractions. During the day, there are phone calls and appointments and just a million things to do.” Not to mention, sleeping. Elizabeth sleeps when the kids are at school. “In the summer, it’s kind of a sleep-whenever-I-get-a-chance type of thing. It’s definitely crazy, but I have been able to stay home with the kids.” Elizabeth’s willing to sacrifice sleep to be there for her kids’ special moments. “It’s my choice to see their games and go to their meets and squeeze in sleep when I can,” said Elizabeth. “Sometimes on my days off, I literally will sleep all day.”

Making Working-From-Home Work, No Matter The Stage Of Life

“Working from home, I could pretty much go anywhere,” said Elizabeth. Her family used to live in Denver, but she needed to find a more affordable housing option and explored neighboring areas. She chose Otis, Colorado, a small farming community in northeastern Colorado, population 500. “I moved out here a year after I started working. I love raising the kids in this small town,” said Elizabeth. “I was able to get housing that fit me and six kids on a budget.”

“Working from home, I could pretty much go anywhere.” – Elizabeth Jones, work-from-home mom

In their home, Elizabeth used to work at a desk in the living room, where she could keep an eye on all the kids. As they grew older, she moved her computer to the office area of her bedroom. “Now I don’t have to keep an eye on little babies or toddlers all the time,” said Elizabeth. “I can shut the door and be in my own little world while I’m working.”

As Elizabeth’s family has grown, her career has evolved too. After her third promotion, she no longer transcribes or does quality control. Now as a Production Operation Control Supervisor (POC), she manages six employees and works with a team of supervisors that oversees 130+ accounts. “We’re in charge of turnaround time, monitoring accounts, and running reports,” said Elizabeth. She loves what she does and seeing the company grow.

“I’ve had the best of both worlds—a great job I love as well as being able to be a stay-at-home mom so I can be there for my kids.” – Elizabeth Jones, single mom of six

Elizabeth says she’s grateful to CareerStep for the opportunity it gave her to grow as a professional. “I’ve had the best of both worlds,” she said. “A great job I love as well as being able to be a stay-at-home mom so I can be there for my kids.”