Empowered to Return to Healthcare and “Forever Grateful” to CareerStep

You can tell a lot about a person by the way they treat other people. For someone like Tabitha Sasenbury, office manager in a New York medical office, you see a heart of gold as she helps chiropractic patients. Her ready smile and savvy office management skills don’t reveal the struggle it took to get Tabitha here. It’s the best healthcare job she’s ever had, with a higher income, a great employer, and no more nights and weekends away from her family—goals she set after completing the Medical Administrative Assistant program through CareerStep. This is the story of how Tabitha gained valuable skills with CareerStep that she uses to take care of patients and doctors.

Full Circle Journey: From Caregiver to Patient to Office Manager 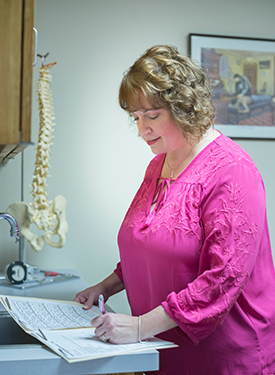 Tabitha’s interest in the medical field started at an early age. At 18 she became a CNA, then a certified home health aide, working at nursing homes, in-home care, and hospice. She also worked as a job coach, empowering and training people with disabilities for employment. Once her youngest child was born, she began working as a residence counselor in a large group home for individuals with developmental disabilities. One night, while helping a client into bed, she and her coworker were assaulted. The incident resulted in an injury to Tabitha’s neck and shoulder, requiring surgery followed by extensive physical therapy. She became partially disabled with chronic neck pain and a 60% loss of use of her arm, leaving her unable to work for five years. Despite her condition, Tabitha was determined to continue working in healthcare.

“It was awesome. Between the grant and NYS Vocational Rehabilitation funding, the entire course was covered, including the adaptive equipment I needed to complete the course.” – Tabitha Sasenbury

With her body no longer able to meet the physical demands of caregiving, Tabitha set out to find another career option and inquired about enrolling in the New York State Vocational Rehabilitation program. “I wanted to take all that medical background and utilize it in a different way,” said Tabitha. “I found out about CareerStep through Mohawk Valley Community College in Utica.” Through further research she learned she qualified for a New York State education grant for women who live in rural areas that wanted to work in healthcare. “It was awesome,” said Tabitha. “Between the grant and NYS Vocational Rehabilitation funding, the entire course was covered, including the adaptive equipment I needed to complete the course.”

Getting Started in Office Management While Managing Her Disability

“After spending so many years assisting people with disabilities, it just came naturally to adapt how I did my own things, just like I taught my patients all those years.” – Tabitha Sasenbury, looking forward to going back to work after five years of medical and vocational rehabilitation.

Tabitha soon signed up for CareerStep’s Medical Administrative Assistant program. As required by her grant, an occupational therapist came to her house to customize her home workstation. “I had to have everything situated at eye level. The OT made adaptations to my computer desk and different things so it wouldn’t bother my neck.” Her workstation included a stand for her books. The stand enabled her to easily swivel her textbooks near the computer without having headaches from chronic neck pain. “After spending so many years assisting people with disabilities, it just came naturally to adapt how I did my own things,” said Tabitha. “Just like I taught my patients all those years.”

In the meantime, Tabitha continued to seek care for her arm and neck. With traditional pain management not meeting her needs, she sought a holistic approach. After convincing her insurance company to agree to chiropractic and massage therapy, instead of pain management, she began treatment at a local chiropractor’s office. The transition was tremendously helpful for her disability and pain.

“I’m a people person. It was rewarding to be able to assist people as needed in the hospital.” – Tabitha Sasenbury, enthused about being back to work after five years

In 2013, Tabitha completed her training from CareerStep with honors. For the first time since her injury, Tabitha was ready to begin working again with her new training in hand. She was only able to work part time, and with her limitations, finding a job that fit her needs was a challenge. Tabitha started working part time for a local hospital in 2015 doing patient registration at the front reception desk. Greeting people and helping them find their way in the hospital proved to be a great fit for Tabitha’s outgoing personality. “I was so happy to be back in the workforce.” said Tabitha, “I’m a people-person—it was rewarding to be able to assist people as needed in the hospital. Most of the time, the people coming in or calling were upset. At the reception desk or in-patient registration, you are usually the first person they see, so the impression you make is very important. You are a reflection of your employer.”

Making a Career Adjustment at the Chiropractor 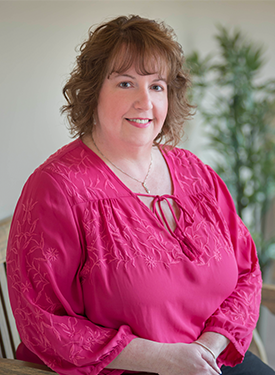 Tabitha continued to visit the chiropractor’s office for treatment while she was employed with the local hospital, getting well acquainted with the doctors and staff. During one of her visits, she learned that her chiropractors, Dr. Doug and Dr. Jerry, were trying to fill a front office position. She suggested to Dr. Doug that rather than hiring someone to simply answer phone calls and make appointments, they should hire an office manager to cover insurance documentation, medical billing, and more. Dr. Doug offered her the job, and she has enjoyed every day since.

“I love it. It’s the best job I’ve ever had … everything that I learned in the course.” – Tabitha Sasenbury, CareerStep learner, chiropractic office manager

Tabitha started her office manager role in January 2016, working about 25 hours a week. “I love it. It’s the best job I’ve ever had!” said Tabitha. “I answer the phones, make the appointments, greet the patients, take their co-pays and make their next appointment. I also do insurance verification, insurance billing, assist Dr. Jerry with accounts receivable, accounts payable, the payroll—everything that I learned in the course.”

Bringing Real Value To The Office

When Tabitha started her role, the office was still implementing a new software program, which, along with new insurance laws, made her job very challenging from the beginning. Every day is a learning experience for her, the doctors, and the patients. “The insurance industry has changed so much, just in the short time since I graduated. The Affordable Care Act and the change in ICD codes have made my job very challenging, even frustrating at times. I try very hard to make sure the patients are as informed as I am about their healthcare benefits. The balance of engaging with the patients and the doctors make it so rewarding. We are a small, family-owned office that has been in the area for 60 years. Our patients are literally like family.”

The doctors recognize the value of having Tabitha’s training in the office. “What she learned in the program, her organizational skills and taking the initiative to figure things out, really helped her with everything around the office,” said Dr. Doug. “She’s organized, efficient, and can complete her office tasks in a timely manner. She is very professional as well as friendly.”

“Dr. Doug saw an increase in office revenue within my first few months at the office. He was very satisfied with my effort to make the office more profitable.” – Tabitha Sasenbury, medical office manager and CareerStep learner

Tabitha has a knack for executing accounts receivable or collecting on unpaid bills. She submits claims for insurance and Medicare. She also invoices patients when needed. “Dr. Doug saw an increase in office revenue within my first few months at the office. He was very satisfied with my effort to make the office more profitable.”

Putting The “Fun” In Office Fundamentals

“You might be the only person that talks with them all day, or the first person that smiled at them,” said Tabitha. “And that’s just one of the reasons that I love my job.” – Tabitha Sasenbury, chiropractic office manager

In addition to being a worthy employee, patients love Tabitha. They can tell that she really cares. “You might be the only person that talks with them all day, or the first person who smiles at them,” said Tabitha. “And that’s just one of the reasons that I love my job.”

If Tabitha is too busy to answer the phone and Dr. Jerry answers instead, patients say, “Where’s Tabitha? Why isn’t she answering the phone?” When those patients later see her, they make comments like, “I thought you left, and I was going to be upset because we like you!” Tabitha smiles and says “No, Dr. Doug and Dr. Jerry are stuck with me!”

Tabitha is happy with her varied responsibilities, and the doctors think her personality is a perfect fit for the job. “Patients really like her,” said Dr. Jerry. “She’s engaging. It gives them a better atmosphere in the office and makes them comfortable. She is organized and does what we need her to do with a smile. Our patients show their satisfaction with our care by coming back again and again.”

“When I took this course, I wanted to work at a doctor’s office, not have to work nights and weekends anymore, and make more money than my other jobs. I succeeded in all three.” – Tabitha Sasenbury, CareerStep learner and medical office manager

The doctors give Tabitha a flexible work schedule, recognizing that if she works more than 30 hours a week Tabitha will suffer pain from her injuries. “When I took the CareerStep course, I wanted to work at a doctor’s office, not have to work nights and weekends anymore. I also wanted to earn a higher income than my other jobs.” said Tabitha. “I succeeded in all three.”

She enjoys doing a little bit of everything each day and credits CareerStep with giving her the tools to manage it all. “I really feel the course prepared me for all the aspects of being an office manager, especially since I’m doing almost all of it myself,” said Tabitha. “I’m forever grateful that I was able to take the course.”