What Work Is Available For A 52-Year-Old With Osteoarthritis?

After a long career in the Arabian show horse industry, putting people skills to work in recruiting, and fascinating jaunts into other careers, Mari found herself nearing retirement. She was 52 years old, in need of a hip replacement due to rapidly advancing osteoarthritis, and working two part-time jobs with no health insurance or full-time job prospects amidst skyrocketing unemployment rates. More than ever, Mari needed something different. This is the story of how Mari used CareerStep to find the perfect ‘retirement job’ where she can work while recuperating from surgery.

“She got several of her friends who were working with her to send me their opinion and talk to me about CareerStep. They talked to me about the training, about the job, and I got talked into it. So I signed up for CareerStep and went through the course.” – Mari Hellriegel, employed with Mayo Clinic for 10 years

Over time, Mari had the pressing need for a hip replacement and a job with benefits, and her friend recruited help getting Mari converted to a work-from-home lifestyle. “She got several of her friends who were working with her to send me their opinions and talk to me about CareerStep,” said Mari. “They talked to me about the training, about the job, and I got talked into it. So I signed up for CareerStep and went through the course.”

Two Part-Time Jobs, CareerStep Training On The Side

Mari’s previous life, working with horses, had taken a toll on her body. “I had been less than kind to myself over the years,” she admits, “Being six-feet-tall, young, and bullet-proof, I thought I couldn’t hurt myself, but I did apparently. I needed a hip replacement rather badly.” Her income from her two part-time jobs wouldn’t cover the estimated $50,000 hip replacement procedure. Mari decided to begin the CareerStep courses to better her financial situation. She saw it as an investment in her future and was determined to get a job with health benefits.

For a few months, her schedule was packed from dawn to dusk. She worked four hours in the morning at Arizona State University, went home to have a sandwich, then went to her second job for four hours, and came home again to sit at the computer. She spent four or five hours per night doing her CareerStep training, finishing around 11 p.m. Mari also often fit about eight hours of study time in on the weekends. “I would do the typing, I would do the modules, I would do the dictations, I just worked at it,” she said. “I finished the course in about three and a half to four months, and two weeks later I was hired by Spheris.”

Mari worked for Spheris for two years and then applied for a position with the Mayo Clinic, her ultimate employment goal. “The Mayo Clinic is right here in Arizona,” explains Mari. “They’re the leading diagnosticians in the world. I mean, they’re cutting-edge, and that was where I wanted to be.” Mari was excited to hear that they required two years of experience for transcription jobs. After passing her application test with flying colors, Mari was offered a job the same day. Shortly after her first day, she learned her situation was an anomaly. The department had never hired anyone with less than five years of experience. “So I was the first person who they hired with only two years of experience,” said Mari. “People kept saying, how did you learn how to do this so well? And I went, well, I went to a really good school, and I happen to really like what I do.”

Able To Work Between Surgeries, From Home 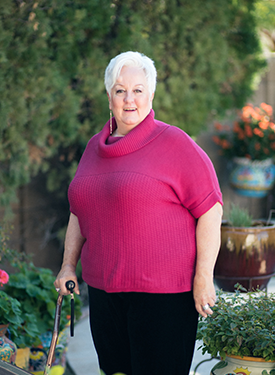 Three months after accepting her first transcription job with Spheris, Mari had the insurance she needed and had her much-anticipated hip replacement. She only took two weeks off work, promising her doctor that she would do her physical therapy and other exercises for recovery. Where most people wouldn’t be able to work for months, Mari jumped right back in to her job. “I worked my way through my hip recovery,” said Mari. “I didn’t have to drive, I didn’t have to climb steps, I had a 15-foot commute from my chair to my computer.”

Since that time, she has had her left knee replaced, her other hip replaced, back surgery, and left shoulder replaced—all through Mayo Clinic. She recognizes the role that working from home has played in her ability to have multiple procedures with speedy recovery. If it weren’t for the fact that she works from home, she would not be able to work through her recovery, either. “If you don’t have to drive, and you don’t have to walk, and you don’t have to do any of the things that are associated with going to work and getting set in an office, you can set it up here at home to work through your rehab,” said Mari. “I’ve never been off work more than two weeks with any of these surgeries.”

Is Medical Transcription A Dying Field?

Since getting into medical transcription a decade ago, Mari has heard the rumors that it is a dying art. “They’d say things like, ‘You’re never going to keep your job, they’re not going to need you,’ and I think they’ve been saying it forever,” said Mari. In her experience, voice recognition has a place alongside transcription. There are doctors who use it, pronouncing clearly and using punctuation properly, but people are still needed to edit the text. However, the vast majority of healthcare providers do not use voice recognition software successfully, as they speak quickly and/or speak English as a second language. “No computer in the world is ever going to understand doctors!” said Mari. “They’re going to talk at warp speed, and the computer types what it hears, which bears very little resemblance to what doctors actually say.”

“I don’t have any reservations about the future of medical transcription. There are always going to be doctors that only a human being can understand.” – Mari Hellriegel, CareerStep learner and Mayo Clinic employee for 10 years

Now in her tenth year of working for Mayo Clinic, Mari plans to stay with the company for the rest of her career. She is happy to rise to meet the high company standards, maintaining an above-industry 99.5% accuracy rate. She says working from home in transcription is much more than it appears to be. “We’re not just typing,” said Mari. “We have to know anatomy, physiology, the different systems, terminology, medications, diseases, and conditions. We have to know all that stuff.” Mari also emphasized the importance of setting up a work environment where one can focus. Treating the day as if you were “clocking in and clocking out” so to speak prevents other demands from interfering with work.

“One of the reasons why I love this job is because you learn something new every single day… It’s self-motivated. How much you make is dependent on how hard you want to work.” – Mari Hellriegel, 65-year-old medical transcriptionist